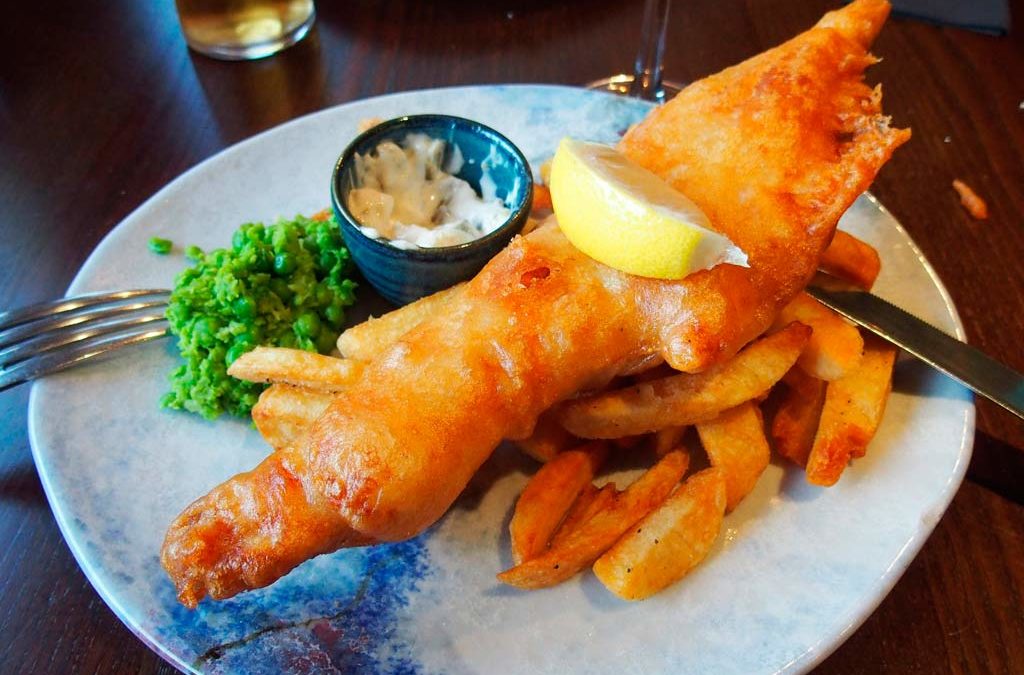 Britain doesn’t have the greatest reputation for its traditional culinary offerings, but this is rather unfair. The UK is actually a fantastic place to visit and try new dishes.

In this blog post we focus on ‘traditional’ dishes that are still popular in the UK and list the top 5 that we think you should try during your visit. But remember this island is full of people, cultures, and history and there are literally thousands of different dishes to try that either originate here or from all over the world.

Let’s get this one out the way first, because most visitors coming to the UK know about this incredibly calorific but delicious dish! It is the quintessential British meal and if you haven’t had them by the end of your stay in Britain then you have seriously missed out!

So what are ‘fish and chips’? Chips in the UK should not to be confused with the American variety, they are thick slices of fried potato. The fish is deep fried in a batter made from eggs and flour. Sounds simple doesn’t it? It is and it’s also so completely delicious!

Generally chip shops (often referred to as chippies) will serve them wrapped in paper with salt and vinegar. Some chip shops and restaurants will offer additional accompaniments such as mushy peas (marrowfat peas cooked until soft and served in their own juice).

But beware! Good fish and chips are not always easy to find, there are plenty of places selling sub par fish and chips so avoid them at all cost! Our advice is to head over to trip advisor and weed out the good restaurants with decent reviews. Or better still utilise your English conversation skills and ask a local! 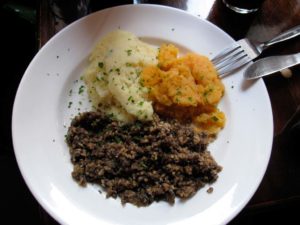 Haggis is long associated with the beautiful country of Scotland, but is actually a very ancient, global dish that dates back thousands of years, when hunters would cook-up the parts of the animal that needed eating first. It’s basically like an oaty, spicy mince and a great source of iron, fibre and it also tastes great!

In Scotland it’s traditionally made form various parts of a sheep and then mixed with onion, oatmeal, suet, spices, and salt, mixed with stock, and traditionally encased in the animals stomach and boiled. Served with Neeps (turnips) and Tatties (potatoes) this is hearty food to warm you on cold nights!

Vegetarian versions of the Haggis are nowadays widely available. There is also a Scottish sport called ‘haggis hurling’, which can often be seen at the Highland Games! 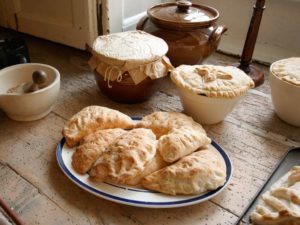 Britain has long had a love affair with the pie, both savoury and sweet! There are far too many to choose from, but popular pies include the following:

Also known as Cottage Pie, this was a dish that was traditionally cooked by rural workers hundreds of years ago and contains minced meat. Cooked in gravy with onions and sometimes other vegetables, such as peas, celery or carrots. The filling is then topped with mashed potato.

This has always been a popular pie and combines a mixture of diced beef, diced kidney (often of beef, lamb, or pork), fried onion, and brown gravy. The ingredients are cooked inside a delicious short crust pastry. Now just add spuds (potatoes) and veg!

This is a type of pie that is synonymous with the beautiful county of Cornwall. The pasty is now hugely popular all over Britain and variations can also be found in Australia, the United States, Argentina, Mexico, Ulster and elsewhere.

It is made by placing an mixture of uncooked meat and vegetables, on one half of a flat shortcrust pastry circle, folding the pastry in half to wrap the filling in a semicircle and crimping the curved edge to form a seal before baking. The traditional Cornish pasty now has Protected Geographical Indication (PGI) status in Europe. 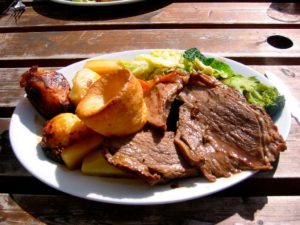 The Sunday dinner has been a British family tradition for a long time. Essentially everyone gathers round to eat a huge plate crammed full of meat (roast beef being hugely popular), Yorkshire puddings (a baked batter pudding typically eaten with roast beef), roast potatoes and vegetables, all topped of with gravy.

Post-lunch conversation is spent talking about how delicious the meal was, whilst complaining that you ate too much!

Often referred to, as a ‘fry-up’, the full English is not the healthiest way to start your morning, but it’s a very delicious one! The breakfast will typically contain the following foods many of which are fried: sausages, bacon, black pudding, eggs, baked beans, mushrooms, tomatoes and bread. Vegetarian equivalents are almost always available in restaurants and are just as filling!

Generally speaking most people nowadays only indulge in this type of meal once in a while. It’s calorific and not particularly healthy but then come to think of it most of the other meals listed on this post aren’t that healthy either!

Of course these traditional meals aren’t as popular as they once were. The UK offers a huge variety of eating experiences and healthier options that don’t involved copious amounts of fried food and meat are available everywhere.

From Falafel to Fajitas and Curry to Canneloni you’ll find every type of dish available on the UK high-street.

There were many more traditional dishes that we could have written about. If you want to find out about other local foods then have some fun googling some of these dishes!